Mobile telecommunications giant, MTN Ghana, has expressed disappointment in the High Court’s ruling on the suit it filed against the National Communications Authority (NCA).

The company however did not clarify if it will seek a review or an appeal, except to say that, it will “explore all available options and next steps in this process”.

The Commercial Division of the High Court on Tuesday, September 1, 2020, dismissed a request by MTN to secure a court order to quash its classification as a Significant Market Power (SMP) by the NCA.

This was after the industry regulator had declared MTN as a Significant Market Power, and said that its dominance in the market space negatively impacted competition as it influenced consumer choice.

In response to the court’s decision, the telecommunications company indicated that although it “respects the decision of the High Court and has full confidence in the Ghanaian judiciary”, it is still unsatisfied, as their “concerns remain unresolved”.

“Having had our day in court, we will refrain from making further statements or comments on this
matter at this time, while we explore all available options and next steps in this process”.

It further pledged to “keep customers, shareholders and stakeholders abreast of any material development in this matter”.

Following the directive, the NCA was expected to start an immediate implementation of specific policies to ensure a level-playing field for all network operators within the industry, with emphasis on maximizing consumer welfare as the growing dominance of MTN “has impacted negatively on competition and consumer choice, necessitating corrective action.”

But in a statement issued on Friday 26th June, 2020, MTN Ghana said although there were ongoing discussions with the regulatory authority to decide the way forward, NCA has already began implementation of the specified policies, hence, its decision to finally seek redress at the law court, after it was officially notified of the decision.

In the suit, MTN asked the Court to quash NCA’s decision, arguing that the regulator did not give it a fair hearing before declaring it a Significant Market Power; and that such a refusal offends the NCA Act itself.

MTN also wanted the High Court to prohibit NCA from further circulating or acting on the said decision.

But the Court, presided over by a Justice of the Court of Appeal, Samuel Asiedu, sitting as additional High Court Judge, said unless MTN successfully proved that NCA was “discharging its functions in a manner not sanctioned by law, it will not be proper for a restraint order to be issued against [NCA]”.

Based upon this, the Court said it was unable to stop NCA from circulating or acting on its declaration of MTN as a significant market player.

The Court opined that the opportunity offered to MTN to make input by way of data fulfills the requirement of due process and procedural fairness. It however added that MTN is still permitted by law to engage NCA on the implementation.

The Minister of Communications, Ursula Owusu-Ekuful, has in an interview with Citi Business News welcomed the High Court’s ruling, saying the decision will give the NCA the opportunity to begin work on the implementation of specific measures within the telecommunications industry to provide a level-playing field for all network operators. 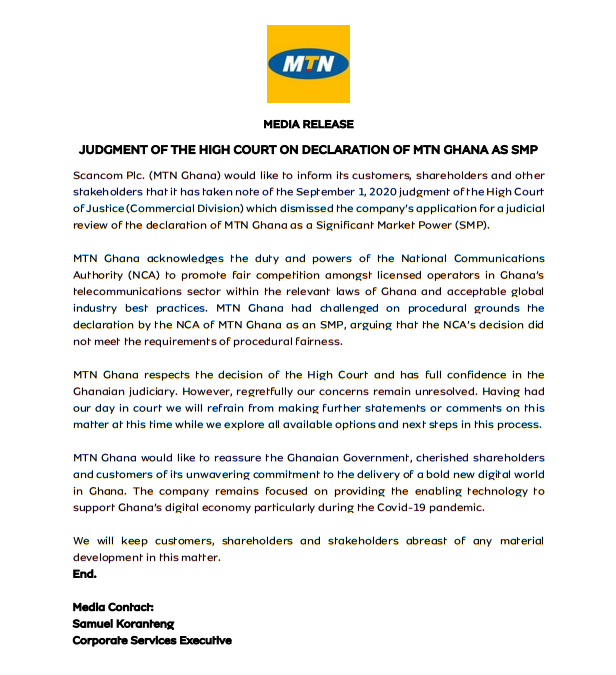 Uber CEO says company could get into cannabis delivery

Minnesota officer shouted ‘Taser!’ but fired a gun instead, fatally shooting a man at a traffic stop, police say

‘In you, I found not only loyalty but efficiency’ – Mahama celebrates Stan Dogbe on 45th birthday

Uber CEO says company could get into cannabis delivery

Minnesota officer shouted ‘Taser!’ but fired a gun instead, fatally shooting a man at a traffic stop, police say

‘In you, I found not only loyalty but efficiency’ – Mahama celebrates Stan Dogbe on 45th birthday