Iran’s media say at least one US fighter jet came dangerously close to an Iranian passenger plane in Syrian airspace – a claim denied by the US.

Iran’s Irib state news agency says the pilot of the Mahan Air aircraft had to quickly change altitude, which resulted in injuries to several passengers.

Video posted by Irib shows one jet from the window of the plane and a passenger who had blood on his face.

But the US military later said its F-15 jet was at a safe distance.

“A US F-15 on a routine air mission in the vicinity of the at [al]-Tanf garrison in Syria conducted a standard visual inspection of a Mahan Air passenger airliner at a safe distance of approximately 1,000 metres [0.6 miles] from the airliner this evening,” Capt Bill Urban, spokesman for US Central Command, said in a statement late on Thursday.

He said the inspection was carried out to ensure the safety of personnel at the US military base at al-Tanf, near the border with Iraq and Jordan.

“Once the F-15 pilot identified the aircraft as a Mahan Air passenger plane, the F-15 safely opened distance from the aircraft,” the spokesman added.

The Mahan Air aircraft en route from Tehran to Beirut landed safely in the Lebanese capital.

It was not immediately known how many passengers and crew were on board the plane.

After refuelling, the aircraft flew back to the Iranian capital on Friday.

In its earlier reports, Irib news agency said that two fighter jets could have been Israeli. Israel “had nothing to do with the incident”, security sources told Israeli public broadcaster Kan. 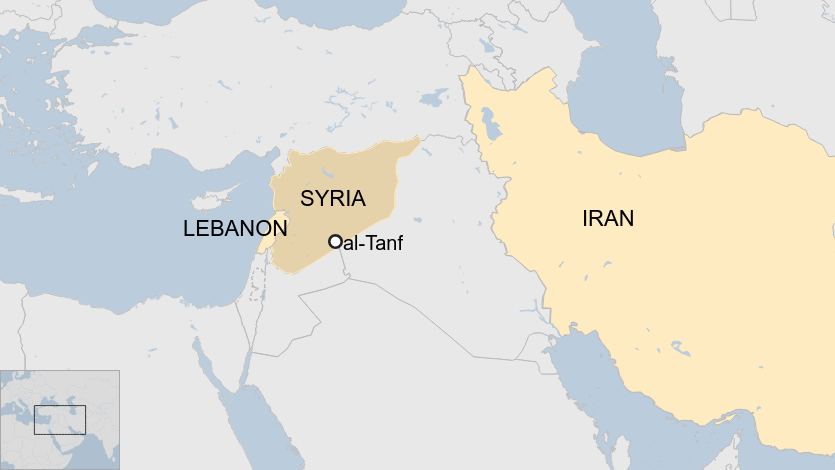 Tensions between Iran and the US have soared since early 2018 when Donald Trump abandoned a multi-power agreement with Iran over its controversial nuclear programme. Since then the two countries have accused each other of carrying out provocative actions against their interests in the region.

Mahan Air is a private Iranian airline that was established in 1991.

In 2011, the US imposed sanctions on Mahan Air, accusing it of providing financial, material and technological support to Iran’s elite Revolutionary Guards.

In 2019, several European countries banned the company from operating at their airports.

A BBC Arabic investigation recently found the airline contributed to the spread of Covid-19 in the Middle East by continuing to fly to destinations where routine flight bans were in place.