Russian forces in Crimea have been targeted by a fresh drone strike.

The Russian-appointed regional leader said a Ukrainian drone targeting Russia’s Black Sea fleet in the city of Sevastopol was shot down on Saturday.

It follows a string of attacks on Russian forces and installations in the annexed peninsula this month.

Early on Saturday, a video showed smoke rising from the area in Sevastopol where Russia’s Black Sea fleet is based. BBC News has not been able to independently verify the footage.

The Russian-installed governor, Mikhail Razvozhayev, played down the seriousness of the incident.

He said the fleet’s air defenses had been activated and the Ukrainian drone destroyed. “It fell on the roof of the headquarters,” he said. “There was no significant damage and no one was hurt.”

Several drone attacks have been reported in Crimea in recent days, including one on an airbase near Sevastopol on Thursday and another on the harbor on Friday.

Earlier in the month, nine Russian jets were destroyed in an attack on the Russian military base at Saky, on Crimea’s western coast. 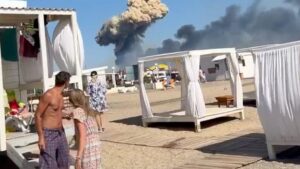 Footage on social media at the time showed crowds of Russian tourists fleeing a nearby resort.