General Secretary of the largest opposition National Democratic Congress (NDC), Johnson Asiedu Nketia, has described as a curtain-raiser the violent clash that happened among members of the ruling New Patriotic Party (NPP) at a funeral ground in Suhum in the Eastern Region last weekend.

According to the Chief Scribe of the NDC, the clash didn’t come to him as a surprise as the ruling NPP is reaping the bad seeds they have sown in their members over the years, thinking that they are untouchable and above the laws of the country.

Speaking on Okay FM’s ‘Ade Akye Abia’ Morning Show, General Mosquito as he is popularly called noted that the NPP have trained their members to use only violence to seek political power with the assurance that they can get away with the law.

“What happened in Suhum did not come to me as a surprise because we reap whatever we sow. We have done a lot of interviews about the violent nature of the NPP where they have trained their members to use violence to wrestle power and also encourage their people to break the law and get away with it because they are NPP members,” he noted.

He held the view that it is not enough for the communication machinery of the ruling New Patriotic Party (NPP) to disassociate the party from the Suhum clash and ask the police to investigate the incident as the party [NPP] is known for going behind the scene to free their members who break the law.

He insisted that the Suhum clash is a party-related issue that was exhibited at the funeral ground; thus, the clash bothers on factions in the party whose members are clashing due to internal power struggle.

He, however, was convinced that nothing good will come out of this Suhum clash as many serious crimes have been committed by party members leading to the death of innocent Ghanaians but nothing good came out after police investigations.

“I have said that if you pamper your children to go wayward, they will one day rebel against you. What we are witnessing is the prelims; the main show is yet to start. It is unfolding, it has not started yet,” he indicated. 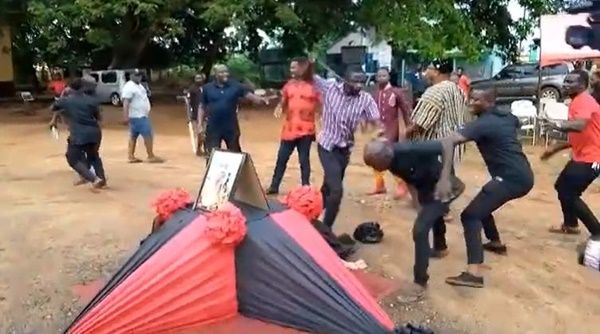 The free-for-all fight among members of the New Patriotic Party (NPP) in the Suhum constituency left two persons injured.

The Party’s Lower West Akyem Communications Officer, Bernard Kwesi Amoani, was allegedly slashed with a cutlass on his forehead by the driver of the Suhum MP.

Another victim, Alexander Odei, sustained injuries on his lips during the chaos which ensued on Saturday, August 28.

According to an eyewitness, the violent attacks happened at the funeral grounds of the late father of one of the party’s communicators, known as Opare.

It was between supporters of the Member of Parliament, Kwadwo Asante, and a Presidential staffer, Frank Asiedu Bekoe, popularly known as Protozoa.

The followers of Mr Asante allegedly made slanderous statements against Protozoa, who is seeking to contest the MP in the party’s next primaries.

One of the followers of the presidential staffer, popularly known as Big Deal, allegedly took a microphone at the funeral grounds to announce and place on record that they have been prevented from greeting the MP.

Infuriated by the turn of events, the supporters of the MP allegedly unleashed attacks on him, leading to the fisticuffs.