This development comes after the movie producer said Lil Win knows nothing about movie production and might lack some technical abilities.

But according to Akwaada Nyame, Ola Micheal has no right to say Lil Win has not got the expertise to be an Executive Film Producer.

He replied Ola Micheal in a long Facebook post, “In films, the executive producer generally contributes to the film’s budget and their involvement depends on the project, with some simply securing funds and others involved in the filmmaking process.

“So the Executive Producer is not the story writer or the director but secures funds for the Project.

“Please you know this better than I do big brother, take off the Lens of he is too known and let the truth be for once.

Lil Win is expected to outdoor his much-awaited movie “Cocoa Season” in the coming months which features numerous movie and music stars. 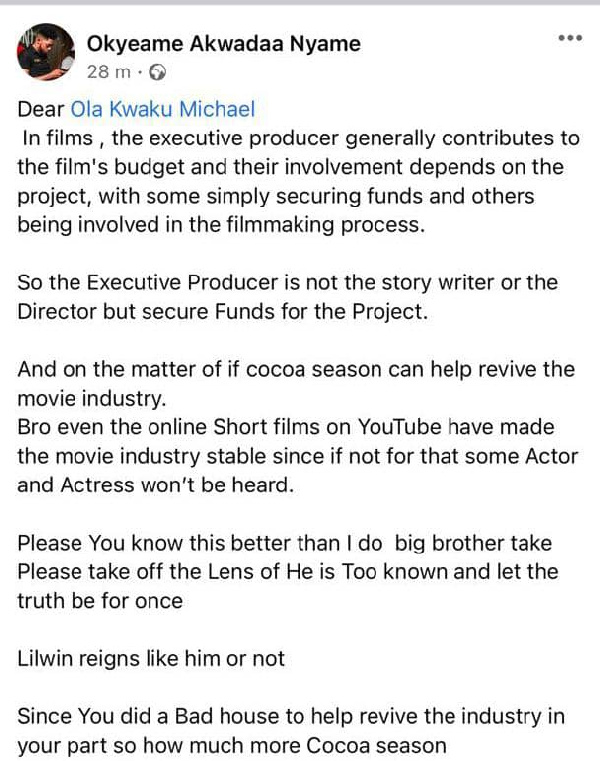 Conceicao confident Porto can storm back and knock Chelsea out

Conceicao confident Porto can storm back and knock Chelsea out

Stat attack: All you need to know about West Brom 3-0 Southampton

Stat attack: All you need to know about Brighton 0-0 Everton

Rumour Has It: European giants Real Madrid, PSG and Inter circle for Lingard

Neymar: PSG teammate Mbappe taught me ‘to be French’