The Ghana Revenue Authority (GRA), has described as false, accusations of fuel smuggling by its Customs Division.

In a statement, the Authority asked the general public to disregard these “negative assertions” circulating on social media purported to be from a private radio station.

“The Authority views these allegations as mischievous and malicious since they have no merit,” it said.

Stating what it terms as the facts relating to the two instances that brought up these allegations, the GRA noted that a vessel with the name ‘MT Randl’ which was “carrying fuel from Togo to Cote d’Ivoire in May 2020 was intercepted in Takoradi”.

The statement added that the vessel was escorted out of Ghana’s territorial waters back to where it came from since it “was in a bad shape and could pose environmental hazard”.

The escort was done by the relevant agencies, including the Ghana Navy, Ghana Maritime Authority (GMA) and the Customs Division of GRA in Takoradi.

The Authority further narrated the situation surrounding the interception of another vessel, ‘Dende’ by the Ghana Maritime Authority and the Western Naval Command of the Ghana Navy in June.

It said, “The ‘Dende’ which was carrying about 50,000 litres of fuel was detained and the fuel offloaded to avoid contamination. The vessel ‘Dende’, together with the fuel, is currently in the custody of the Ghana Navy at the Western Naval Base. Investigations are currently ongoing in the case of the arrest of the ‘Dende’ and the outcome will be made public.” 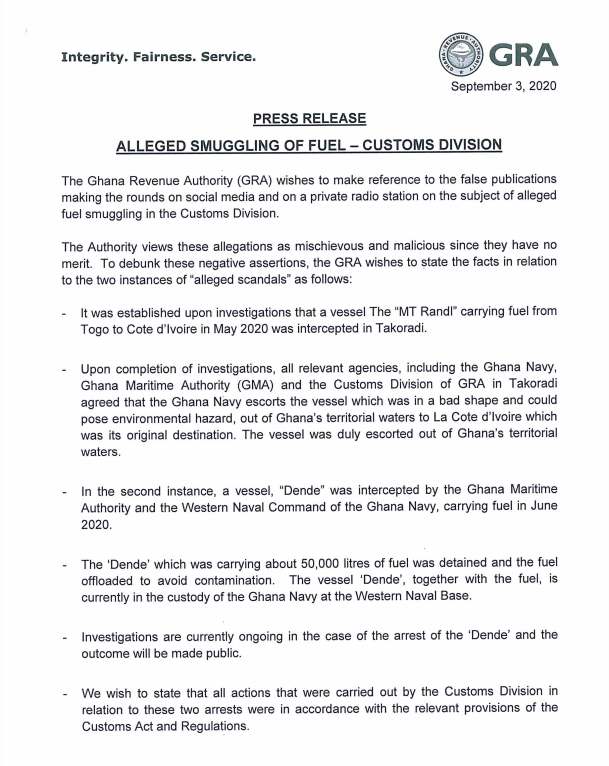