Crowds have gathered in Istanbul, as the historic Hagia Sophia site opened for Friday prayers for the first time since Turkish authorities ruled it could be converted into a mosque.

“Muslims are excited, everyone wants to be at the opening,” Istanbul Governor Ali Yerlikaya said on Thursday.

But a Turkish court annulled its status, saying any use other than as a mosque was “not possible legally”.

President Recep Tayyip Erdogan then announced that the world-famous site would be ready for Friday prayers from 24 July.

About 1,000 worshippers were allowed in through security checkpoints, while others laid out prayer mats outside.

The decision to turn it back into a mosque was criticised by religious and political leaders worldwide.

Hagia Sophia was built as an Orthodox Christian cathedral and first converted into a mosque after the Ottoman conquest nine centuries later.

While there was considerable excitement as crowds headed to the Unesco site, not everyone was happy. The secular opposition party that runs Istanbul has described the move to turn it back into a mosque after 86 years as political rather than religious.

In a televised address on Thursday, Governor Yerlikaya urged those attending prayers on Friday to bring “[face] masks, a prayer rug, patience and understanding” to help prevent the spread of Covid-19.

He added that healthcare workers would be made available at the site.

Religious Affairs Minister Ali Erbas said about 1,000 people would be able to attend prayers at any one time. Many of those who reached the grounds of the ancient site on Friday sat outside, waiting for the opening ceremony to start.

Inside, a turquoise carpet had been laid on the floor to prepare for prayers and Christian relics were covered up with white drapes or obscured by lighting.

Scaffolding was erected inside the dome as builders scrambled to convert the interior of the ancient building. By Friday the scaffolding was largely covered by red panelling.

Among the Christian mosaics expected to be obscured during Muslim prayer was the Ninth-Century mosaic of the Virgin Mary and Jesus inside the apse.

Mr Erdogan is expected to be among the worshippers on Friday.

Why was Erdogan’s move controversial?

Islamist groups and devout Muslims in Turkey had long called for Hagia Sophia to become a mosque again, but secular opposition members opposed the move.

When President Erdogan announced the decision on 10 July, it was met with widespread criticism.

Pope Francis responded by saying that his “thoughts go to Istanbul,” adding: “I think of Santa Sophia and I am very pained.”

The head of the Eastern Orthodox Church, Patriarch Bartholomew I, warned that the conversion of the building would “disappoint millions of Christians” and fracture two worlds.

The World Council of Churches, a worldwide Christian organisation, warned the decision would sow division.

Unesco said it regretted the move, which further enflamed tensions with neighbouring Greece, home to millions of Orthodox followers.

But Mr Erdogan stressed that the country had exercised its sovereign right.

“After 86 years, Hagia Sophia will serve as a mosque again, in the way Fatih the conqueror of Istanbul had indicated in his deed,” he said.

He added that the building would remain open to all Muslims, non-Muslims and foreign visitors.

Many Turks were sceptical. A former Erdogan ally, Ali Babacan, said Hagia Sophia had “come to the agenda now only to cover up other problems”.

Novelist Orhan Pamuk told the BBC earlier this month that converting it back to a mosque was a sign that Turks did not want to be secular any more. 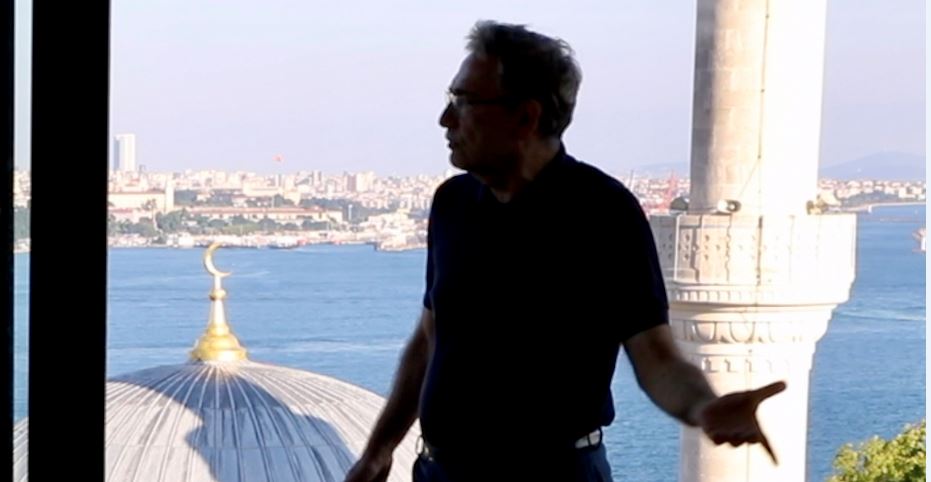 Kemal Ataturk changed… Hagia Sophia from a mosque to a museum, honouring all previous Greek Orthodox and Roman Catholic history, making it as a sign of Turkish modern secularism

The head of the secular Republican People’s Party (CHP), Kemal Kilicdaroglu, said that all the president was concerned with was domestic politics. And a July opinion poll suggested 43% of Turks saw the move as a way of avoiding discussion of the country’s economic difficulties.

The iconic, domed building sits in Istanbul’s Fatih district, on the west bank of the Bosporus, overlooking the Golden Horn harbour.

In 1453, in a devastating blow to the Byzantines, Ottoman Sultan Mehmed II captured Istanbul (formerly known as Constantinople) and Hagia Sophia – an Orthodox Christian cathedral – was converted into a mosque for Friday prayers.

Four minarets were added to the exterior, while ornate Christian icons and gold mosaics were covered with panels of Arabic religious calligraphy.

After centuries at the heart of the Muslim Ottoman empire, it was turned into a museum in 1934 in a drive to make Turkey more secular.

It has since become one of its most popular tourist sites, receiving more than 3.7 million visitors last year.

Although it has had a small prayer room since 1991, and calls to the faithful have been heard before, Friday’s event are the first mass prayers inside the site since the 1930s.

Government didn’t fail in galamsey fight, but there are gaps to deal with – Mireku Duker