Macron will visit Algeria again five years after his last trip in an effort to mend relations.

After Algeria gained its independence from France 60 years ago, French President Emmanuel Macron will travel there the following week in an effort to mend the frayed relations between Paris and Algiers. 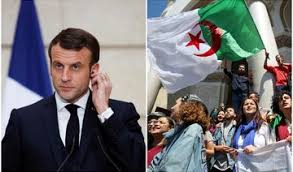 Macron will visit Algeria from Thursday, August 25, to Saturday, August 27, according to a statement from the Élysée Palace.

Following a phone conversation between Macron and his counterpart, Algerian President Abdelmadjid Tebboune, the presidency stated that “this trip will contribute to deepening the bilateral relationship looking to the future… to reinforce Franco-Algerian cooperation in the face of regional challenges and to continue the work of addressing the past.”

A short time has passed since Algeria celebrated its 60th anniversary of gaining independence from France before the visit.

French-Algerian relations reached an all-time low in late 2017 as Macron allegedly questioned if Algeria had ever been as a nation before the French invasion and accused its “political-military establishment” of rewriting history and inciting “hate toward France.”

In reaction, Algeria withdrew its ambassador, but relations between the two parties seem to have subsequently improved.

Following a bloody eight-year war that came to an end in March 1962 with the signing of the Evian Accords, the country of North Africa gained its independence from France.

Days after a referendum in which 99.72 percent of participants voted in favor of independence, Algeria eventually achieved independence on July 5 of the same year. Despite this, Algeria’s relations with France are still plagued by the 132-year occupation.

Sixty years after the Évian Accords, Algerians and French people still reflect on the horror of the war and its consequences.

Algeria recently came to the attention of the European Union in its efforts to reduce imports from Russia due to its substantial natural gas reserves.