by Chris
in General, GOVERNMENT AND POLITICS
0

The Minister for Education, Dr. Matthew Opoku Prempeh has been selected as the recipient of the 2020 Harvard Ministerial Medal of Achievement.

He is being recognised over the work he has done over the past four years in strengthening public education in Ghana.

A letter signed by the Executive Director of the Harvard Ministerial Leadership Program, Michael R. Sinclair, PhD, congratulated the Programme Team as well as the Advisory Board on Dr. Prempeh’s selection.

Each year, the Harvard Ministerial Leadership Program selects one of its Alumni for special recognition of stellar progress towards achieving priority goals during their term in office. 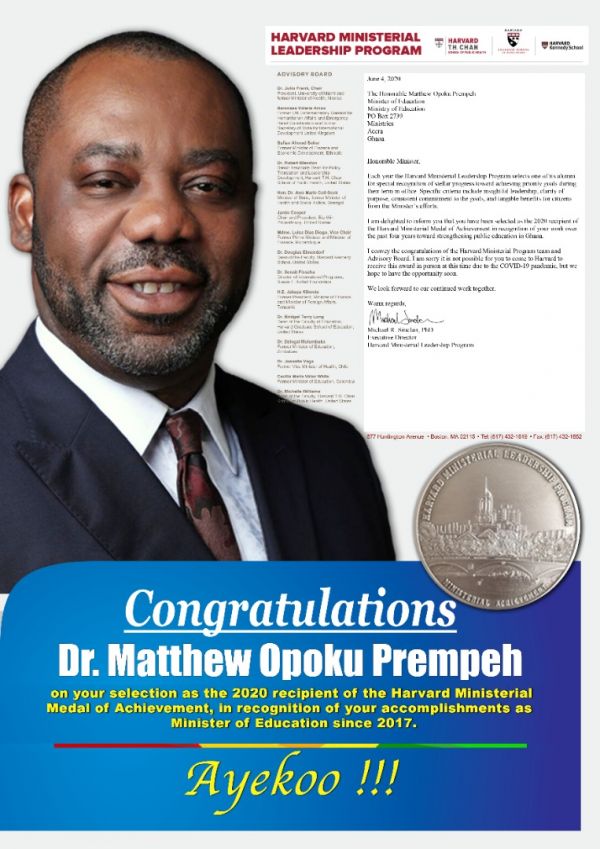 Specific criteria include insightful leadership, clarity of purpose, consistent commitment to the goals, and tangible benefits for citizens from the Minister’s efforts.

Dr. Prempeh, who is the Member of Parliament for Manhyia South Constituency, was appointed by H.E. the President Nana Akufo-Addo as Minister for Education in January 2017.

He has been recognised on several occasions in recognition of his leadership in driving the governments agenda in the education sector.