A close friend of the man of the moment Dr. Kwame Fordjour identified as Jones Gyedu has come out to share some deep revelations about the man behind “UN Kofi Annan Excellence Awards”.

Social media has been thrown in a state of shock after it emerged that the humanitarian award received by some celebrities and politicians in the country last week is just a scam.

After news of the scam went viral, a close friend of the man behind the act has revealed that he(Kwame Fordjour) has been scamming people for the past 25 years.

Taking to his social media timeline, he shared his experience with him including giving out his nickname adding that they grew up together and he knows what he is saying.

Read his full story about him below:

When I saw his pictures over social media last night, I wasn’t surprised. I was rather sad. But I was surprised the people who went for the awards didn’t do due diligence.

We grew up together at Santasi, Kumasi. My house was just about 50 meters away from theirs. He was some few years older than me. When he was in SSS 3, I was in JSS 2. He was more like my academic mentor. He inspired me to read science at the SHS. After school, I would go to his house where he would share stories about the national science & math quiz and encourage me to do well at my BECE, attend a good SSS (now SHS) and possibly represent my school.

I went on to win the NSMQ with St PETERS in the year 2000 and eventually ended up a doctor. For this, I partly owe it to him for his encouragement.

What happened to him?

I saw he has a ‘Dr’ title preceding his name. It was when “my eyes opened a bit” that I realized his SSCE (as it was known then) results were not good enough to have secured him admission into a tertiary institution. I learnt years later that he had aggregate 24. He confirmed this to me himself, when I became a big boy and also got to know the system.

When I finished SSS, I went to visit him one day. That was when I saw that something was really really wrong. He had a replica metallic stamp of KNUST and UG in his bag. Together with replicas of the papers on which university certificates were printed. He was dishing out fake certificates to those who had the right amount. He himself used one to secure a job but turned the offer down because the money was too small. This was in 2001.

In the years that followed, he virtually became a full-time con artiste. This space cannot contain all that he did. I heard some of the stories from third parties. Some of his victims approached me to know if I knew his whereabouts. Since he was on the run.

He was on the run because the BNI was looking for him. What happened? I will share this particular one.

In 2004, the parents of a pupil staying at Kwadaso, Kumasi, contracted me teach their ward science and mathematics in their house. When they found out I lived at Santasi, they asked me if I knew “WyClef”. Of course, I knew because that was his nickname at Technology Secondary School (now KNUST SHS). So I told the family I knew him.

Then they shared the story. He had taken GHC1,500 (Fifteen million Cedis at the time, before redemomination) from 20 students with the promise of facilitating their admission to KNUST. Make no mistake, ‘fifteen million cedis’ at the time was huge money. When the school started shipping out admission letters, the said students contacted him for feedback. He quickly asked them to organize more money and meet him in front of the KNUST Administration block for their admission letters. Yes, in front of the Administration Block itself.

The couple told me they also paid the money to secure a place for their first child who was seeking admission. Then WyClef showed up with an elderly man whom they didn’t know but the description they gave me fitted that of his father. There, you pay the top up, and your “admission letter” was handed over to you. The 20 students and their parents/guardians formed a queue there.

I was surprised to learn that the man was possibly his father. This man was a a very soft-spoken pastor who had endured a lot from the hands of people his son duped. But that’s for another day. But up to today, I still cannot believe Emma went there with Osofo to take those monies.

Of course, can guess what happened after the monies were paid and those fake letters were issued. What pained most of these victims was the fact that the fake letters had the correct bank account details of KNUST where they were instructed to pay their first year fees. And they did. Weeks later, a formal complaint was made at the police station and the BNI got involved.

He vanished from Kumasi for almost 10 years. And later resurfaced with clear evidence of a health problem I wouldn’t want to go into. This was after he was deported at Heathrow Airport after attempting to migrate to the UK. The last time I saw him was about 8 years ago, wearing two shirts and a suit in a hot weather. We spoke for about 15 minutes by the roadside, and I really believed all the stories I heard about his new state of health.

I am saying all these because he himself has admitted to scamming some celebrities in an “award” scheme. And some of his victims in previous schemes have remained friends with me for years.

I generally felt sad and sorry for how things turned out for him. Undoubtedly, he was a smart guy. I fully appreciate and respect the fact that he encouraged me, gave me science books to learn and all. When I completed JHS (and before my BECE results were released), he gave me his Physics and Chemistry books to start reading.

In spite of everything, I will add him to the three most important people who fired me up to learn hard, during my JHS and SHS days. As to what happened to him along the way, I cannot tell.

Anytime I call my mother and she tells me, “Kwaku, I saw Emma around their house and he asked of you”, I still get sad.

Even though I know these things, I was still surprised seeing his images on social media. And more surprised that those who participated in the ceremony did no due diligence. A simple google check of his name would have revealed that in 2010 he was arrested for attempting to scam some rural banks in a very similar awards scheme.

Life can be full of drama. He had a really big potential and I seriously consider him a better student than I was. But things got messed up. As to the real reason, I cannot tell. 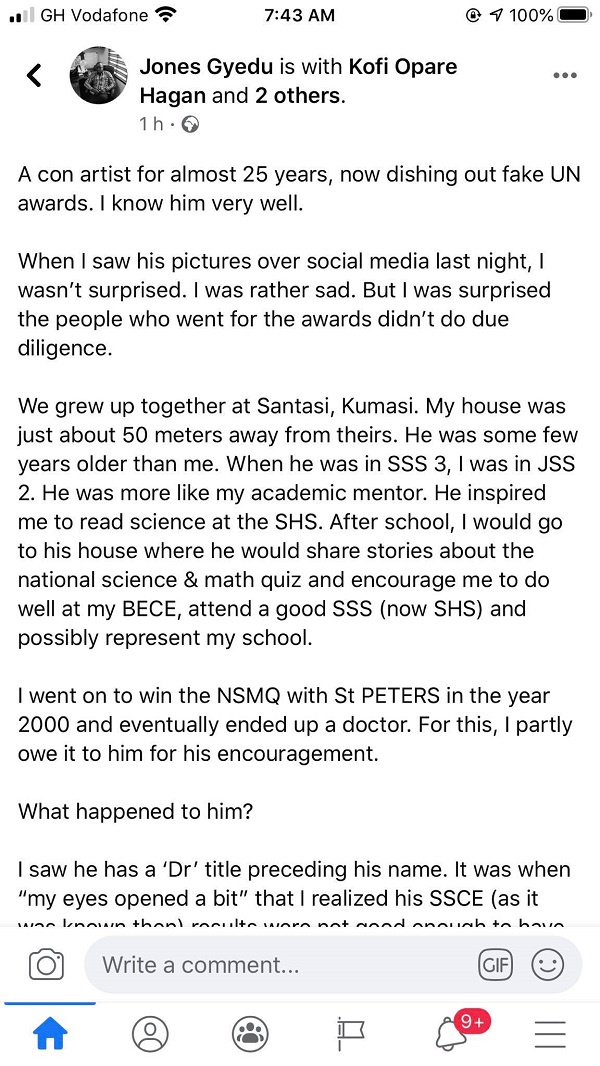 How Kufuor, Mahama and Akufo-Addo combined to save Dr Kofi Amoah from coronavirus

How Kufuor, Mahama and Akufo-Addo combined to save Dr Kofi Amoah from coronavirus

Philip was a natural leader but always fulfilled his sense of duty, friend says