Breakdown of GFA’s inherited debt of over GHC11 million

The Ghana Football Association (GFA) is currently in huge debt following the revelation that the Association owes in excess of GHc11 million.

The details of the debts were contained in a document titled “GFA Legacy Debts” which was presented to club administrators during a recent Executive Council meeting.

The Kurt Okraku administration came into office last November, having taken over as FA President from the disgraced Kwesi Nyantakyi.

However, it appears the new administration will have a hard time balancing the books, especially looking at the debts it inherited.

Pulse Sports brings you a breakdown of the total accumulated debt by the GFA:

The Association owes Kizito Beyuo, the arbitrator of the GFA and GLO impasse, a sum of $35,000.

Also, the FA has a debt of $180,000 owed to former Black Stars coach, Kwasi Appiah as outstanding salaries and bonuses.

Meanwhile, there’s another debt of GHc450,000 for the land on which the GFA secretariat is cited.

The Association also owes Travel Matters an amount of $293,000 and Kenpong Travel and Tours a sum GHc26,000.

Also, the GFA has a debt of GHc6,500 for the big television placed in the Board Room of the Association. 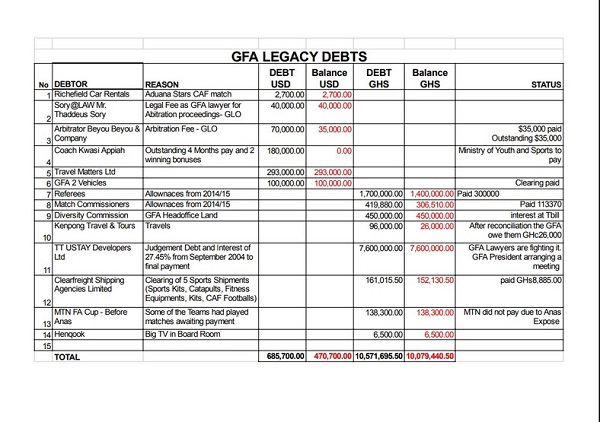