Artiste of the Year results: Medikal had a paltry 2% votes in 2020 VGMAs

Rapper Medikal whose audience appeal was high in 2019 following the release of monster hit songs managed to poll only 2% votes in the 21st edition of the Vodafone Ghana Music Awards.

The event organised a few days ago recognised artistes who performed exceptionally well between January 1 and December 31, 2019.

The topmost (Artiste of the Year) award was won by Kuami EUgene. From the bar chart, highlife musician polled 36% of the total votes cast.

Gospel musician Diana Hamilton had 26% while Sarkodie got 22%. Kofi Kinaata and Medikal had 14% and 2% respectively; making the Sootuom-based rapper the last on the list.

He however walked home with the Hiplife Song of the Year as his ‘Omo Ada’ record beat competition from the likes of ‘Ofeetso’ by Sarkodie.

In the year under review, Medikal did not only release hit songs; he performed at major events, did a number of collaborations and also saw his audience appeal rise.

The VGMAs, organised by Charterhouse, was held over the weekend at the Grand Arena, Accra International Conference Centre.

The Industry Awards ceremony was held on Friday while the main event was held on Saturday.

Below is the results for the Artiste of the Year category. 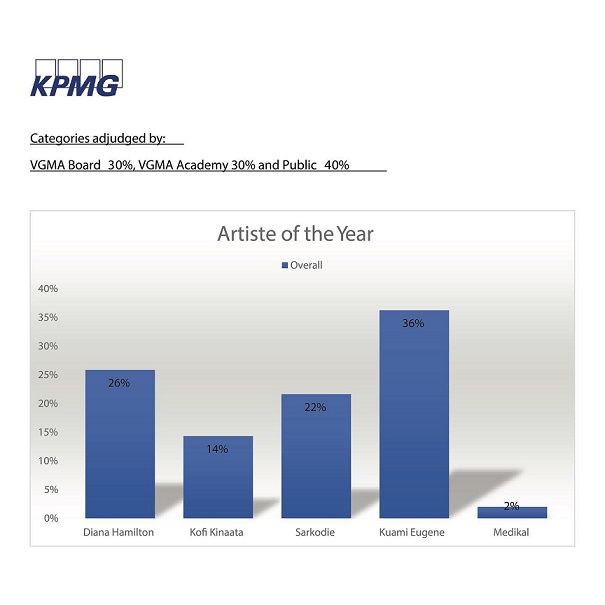 Ghanaians Do Not Want A ‘Dumsor’ Leader – Says Prez Akufo-Addo

Don’t Be In A Rush To Declare Dec. 7 Results Within 24 hours – NDC Warns EC

Ghanaians Do Not Want A ‘Dumsor’ Leader – Says Prez Akufo-Addo

Don’t Be In A Rush To Declare Dec. 7 Results Within 24 hours – NDC Warns EC

“Electric Shock”: We’ll Know Who Has Been Joking By Dec. 8 – Greenstreet To NPP, NDC